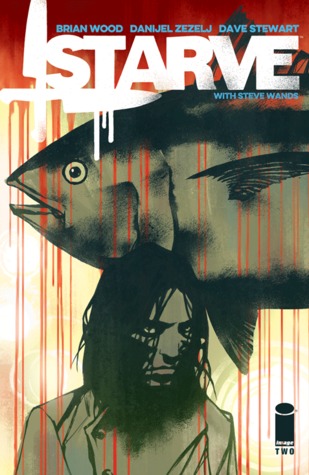 Issue #2, “The Mighty Bluefin”, starts off with Gavin having reached Starve’s final round. Gavin decides to drag Sheldon along for a night on streets, seeing as how he still has a day and a half until the finals start. While some people may be happy to see Gavin advance this far, his rival, Roman, is one person who is the most upset of this situation. To ruin Gavin and get him knocked out, he decides to move the show up to the next morning. Which would be the morning after Gavin is out on town drinking.

Then to make matters worse, even if Gavin is somehow able to make the show in time and compete, contestants will have to prepare Bluefin. A fish which is on the borderline of extinction, that they must find themselves, and can only be purchased on the black market.

This issue made some great advancements: Gavin’s development is going along perfectly, and his is a great character! We learn a little more of his background, his motives become more clear, and start to see what type of person his is.

The plot was something that impressed me, as well. In my previous review, I was little uncertain as to what direction to the story was going – whether it would end up being some type of mystery/thriller or a story about Gavin’s personal life story or what. It is pretty clear now, that this comic’s main focus will be on social and economical inequalities. It briefly went into the discrepancies last issue, but now – especially with the Bluefin task – we start to see what the message is this comic is trying to say.

Some of the issues I had with this issue ( XD ) were, aside from Gavin, and kind of Sheldon, no other characters are getting developed. Gavin’s wife is completely non-existent in this issue, and while his daughter does have a big, surprising scene in this issue, I have no idea where here motivation is coming from.

This brings me to the plot: The first issue brought so much to the table with what the comics was going to explore – and while I felt this issue does an excellent job with Gavin, and the show Starve, and exploring the social/economic issues, I felt like a lot was left out. I don’t expect every plot to be in every issue, but this time a lot of the “mysteries” in the story felt more like “plot holes”, and I think they definitely had the time to put more into the issue.

I love the art style, but there were just way too many of what I felt were wasted panels. Too many times, there were 3 or 4 panels just to show the steps of food being prepared, or a single panel with no words or a single text box. Those could have been taken out, condensed, or have had information added to it.

Don’t think that this comic as a whole fell off, or that it is now bad. I think this comic is amazing! What this issue does focus on and choose to advance, it does so excellently. Gavin’s character is so badass, and I love how Brain Wood is using Starve to show the discrepancies between rich and poor.  However, there were just those few things where the comic let me down, and I know they could have done better.

I still completely recommend this comic: for both food fans and those who are interested the economical divide.