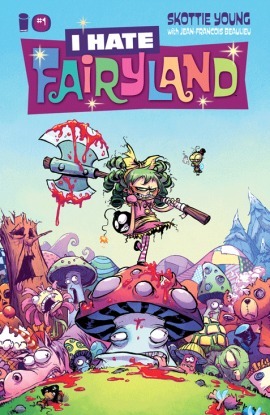 All kinds of awesomeness

The Adventure Time/Alice in Wonderland-style epic that smashes its cute little face against Tank Girl/Deadpool-esque violent madness has arrived.

In an adventure that ain’t for the little kiddies, (unless you have super cool parents, then whatever), you’ll meet Gert — a six year old girl who has been stuck in the magical world of Fairyland for thirty years and will hack and slash her way through anything to find her way back home. Join Gert and her giant battle-axe on a delightfully blood soaked journey to see who will survive the girl who HATES FAIRYLAND.

I first heard about this series at the end of last year, and since then, it has been my most anticipated new series of the 2015 year! All I had to go off of was the name of the comic and its cover art: a fun, light-hearted cartoon style and coloring, but with a sinister smiling little girl, who has a bloody double-edged axe and bomb in hand, and is with a group of frightened, beat up and bloodied fairytale creatures screaming in fear around her. Not a clue what the plot was, but sign me up!

One upon a time, there will a little girl named Gertrude. She dressed as a princess, would play with her stuffed animals, and would dream of being taken away to magical fairyland. One day her wish comes true, and she is suddenly swallowed up by a hole in her room and is dropped off in Fairyland.

This is where she meets all the magical, happy, and bright colored creatures – including Queen Cloudia of Fairyland who personally welcomes Gertrude and gives her a map which will lead her on a quest through all the lands, so she can retrieve a key to return home.

Gertrude went of that quest 27 years ago, and she is still looking for that FLUFFING key.

I want you picture the most stereotypical, trope-y version of a story where a little girl is going to a fairyland. That bright happy world, with talking animals, a beautiful princess who gives a map to go on a quest across Peppermint Pike to Candy’s Rock, and how happy and adorable that little girl in her own pink dress must feel about the everything. You have something like that in your head? Good. Now I want to take that plot, and all the tropes that came with, and literally throw them out the window! And instead replace that little girl with the most miserable, violent, vulgar, psychopathic, 35 years old women who is stuck in a child’s body, and has been stuck in the magical fairy land, looking that fluffing key for 27 years!

Skottie Young takes that classical fairy tale story, and throws it on its head!

Gertrude is one-of-a-kind. Even thought she has been stuck in Fairyland for nearly three decades, because of the magic of Fairyland, her body has stayed the same as the child who first came here, while with her maturity, social, and mental aspects of her have been able to age. And lets just say, Gertrude isn’t the least bit happy about her situation.

The story starts off with the Sacred Moon narrating her story, but Gertrude quickly looses her patience and tells the him to “fluff off” and then processes to shoot a cannon at the Moon and blow him up. However, there a witnesses – the Stars. Gertrude then pulls out her cannon machine gun and goes on a star killing massacre to prevent word from spreading it was her (With this, Queen Couldia has finally had enough of Gertrude and can longer wait for her to find the key, and decides to call if for some “help” to speed the process of leaving… or – disappearing). She later also attempts to robs a casino (again) and is running from the mushroom-head police force – which she so politely calls “dickheads”. I did mention this girl is vulgar, but I guess I didn’t say how much of a potty mouth she has XD

Gertrude has a major attitude, is snarky as hell, and is one pissed off women (girl?). She may look 8, but definitely has the vocabulary of an adult. Kind of like how Battlestar: Galactice used “frak”, Skottie uses the word “fluffy”. So we have saying such as “fluff off”, “well, fluff you, and fluff this map”, or “hugger fluffer!”.

Obviously, this sense of humor is NOT going to be for everyone. Myself, I thought everything about comic was hilarious XD The cartoon coloring and art style, mixed the violence and blood; how Young spun the character of Gertrude. I thought they way he made fun of the whole fairy tale story was genius! It is literally the complete opposite of what you would expect. Also in the issue, he pokes fun at princesses, how all fairy tales have riddles, and other little things in the fairyland world that you would think off.

I’ll say it again: the type of humor will not be for everyone. If you don’t mind these types of jokes though, then I wholeheartedly recommend picking up issue #1!