Today I am interviewing Zubin Mathai, author of the new fantasy & inspirational-quest novel, The Oarmsan.

DJ: Hey Zubin! Thanks for agreeing to do this interview!

Zubin Mathai : Hi DJ! You’re welcome, and I’m happy to be doing this interview. A little bit about me: I grew up in Montreal, Canada, but now live in sunny Ojai, California. I’ve been through quite a few careers over the years: video game programmer, consultant, entrepreneur, but a few years ago I wanted to re-capture the joy I felt as a kid daydreaming up stories, so I threw myself fully into my writing.

DJ: What is The Oarmsan about?

Zubin: The Oarsman is about an old man near the end of his life. When his wife dies, he hears a magical river singing out, and it makes him ache to know if the paradise at its end can refill his heart. He hires an oarsman to take him upstream, but they are blocked by a sinister judge and sentenced to revisit all the roles the man had played in his long life. As the two men row back through time the judge sends agents to derail their quest, and the man begins to suspect that the oarsman is more than he seems.

DJ: What were some of your influences for The Oarmsan?

Zubin: I am a bit of an oddity as a writer, in that I haven’t read a novel in over twenty years! I get inspiration from film, and so the fantasy aspects of my book were influenced by adaptations of Tolkein and Rowling. The inspirational half of the novel is influenced by writers such as Herman Hesse and Paulo Coelho.

Zubin: The character of the Oarsman is a wizened and elderly man of the river. Its currents seem to flow through him as his life-force, and he uses its deepest magic and knowledge to aid the Man on his journey.

The Man, the main character, is not overly revealed to the reader at first. Instead, we learn about him as he does, as he delves into his past to revisit all the roles he has played. We find out he was an artist trying to paint an impossible masterpiece, a bloodthirsty warrior looking for peace, and a sage too afraid to climb a mountain that holds his salvation. The Man also wore many other faces.

DJ: What is the world or setting of The Oarmsan like?

Zubin: The book takes place in the time of castles and knights, but as the story progresses the reader begins to suspect that it is not the ordinary version of a past era. There are cults and temples hidden in the forests, and there are whispers from the trees themselves of a long-forgotten ancient people that lived on the lands the river twists through.

DJ: Now, the synopsis doesn’t say anything about dragons, but there appears to be some type of winged creature on the cover… 😉

Zubin: One of the past roles of the Man that they visit is a dreamer. He is a fat and jolly young man, addicted to a magical fruit as much as he is to dreaming. He imagines himself a knight, and whenever bored pictures himself rescuing a damsel from a dragon. But, once the Man enters this dreamer’s life, and those two ends of a single life-stream clash, the daydreamed dragon becomes more real than either ever pictured.

DJ: What was your favorite part about writing The Oarmsan?

Zubin: Since all of the roles in the book are my own roles (albeit modern equivalents), it felt great to excise them from my heart by writing them out. Being an entrepreneur and running an internet business became the merchant of the story who was addicted to riches. Me trying to write inspirational adventures became the artist trying to capture with his brush that elusive, perfect painting.

Zubin: Early feedback suggests that different people are taking different things from the story. Some love the adventure and action, while some love the mystery and wisdom of the oarsman character. It is the type of book ripe for discussion, and for people to re-read it and re-interpret it every time they do.

DJ: What was your goal when you began writing The Oarmsan? Is there a particular message or meaning you are hoping to get across when readers finish it? Or is there perhaps a certain theme to the story?

Zubin: Even though the book is mainly an epic adventure, set in a fantasy world, it is also equally an inspirational tale. So, I hope readers question their own roles in their life. Is their guilt or unanswered love in your past? Is there regret? Is anything you’ve been in your life preventing you from feeling fully happy? The main theme of the book is that worthiness and happiness can be recaptured at any moment, and that aching to change your past is the biggest curse a person can carry.

DJ: When I read, I love to collect quotes – whether it be because they’re funny, foodie, or have a personal meaning to me. Do you have any favorite quotes from The Oarmsan that you can share with us?

Zubin: I like this quote from the Oarsman character, since it not only sums him up, but also the feel of the novel itself (a winding adventure as mysterious and magical as the story’s river): “Yes, my friend, I have spent my whole life on this river and have learned its magic and lessons. All I know is that when it calls I am quick to be on its waters, letting its currents take me where they will.”

DJ: Now that The Oarmsan is released, what is next for you?

Zubin: My next book is already up for pre-order on Amazon, and it will be released at the end of January, 2017. It is called The Ant That Found God. It is a purposefully provocative title, but, in essence, only a simple fable of action and adventure. An ant gets lost in the deepest and most mysterious parts of nature, and the friends, enemies, and mysteries she meets will change her life forever.

DJ: Before we go, what is that one thing you’d like readers to know about The Oarmsan that we haven’t talked about yet?

Zubin: It is a slightly different sort of fantasy novel, and I think it’ll appeal to those looking for a story that not only has adventure and action, but one that will also make you think. Hopefully everyone can see themselves in the main character (for we’ve all gone through periods of questioning and searching for aspects of love or happiness). And seeing what the Man finds will hopefully shed light on the readers’ own outlooks.

Zubin: I’d just like to add that I love and encourage feedback. Since this is my first novel (though I’ve written a lot of non-fiction and smaller pieces online), I’d appreciate it if people who loved (or hated) the story reach out to me and let me know! 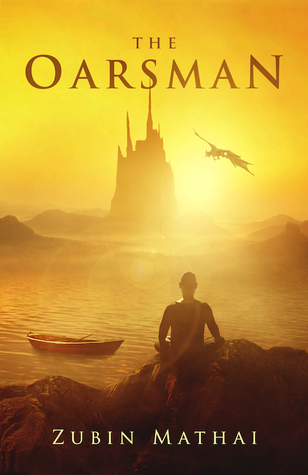 In The Oarsman, a magical river begins singing, and a dying man suddenly aches to know if the paradise at its end is real enough to fill his heart.

He hires an oarsman to take him upstream, but a twisted encounter sends them back to revisit every role the man has played in his long life.

A merchant hoarding, an artist painting love, a warrior looking for peace in war, and a dreamer imagining himself a knight to fight a dragon — these, and more, were faces of the man.

As sinister agents relentlessly pursue, and as they row further back into the man’s past, the man begins to suspect that the oarsman is more than he seems.

The Oarsman, with its combination of adventure, fantasy, and spiritual inspiration will delight any reader, and also excite the currents of the river flowing through all our hearts.

Zubin Mathai was born in Port of Spain, Trinidad, in the West Indies. He knew little of his birthplace, however, having moved to Montreal at four months old and growing up there. He currently lives in Ojai, California, a mecca for the precious peace rolling down from the mountains surrounding the city. Zubin spends his time hiking the mountain trails, melting into nature’s embrace, and also writing about the longings and fulfillment of the human spirit.