Book Review: Voyage of the Basilisk (Memoir by Lady Trent #3) by Marie Brennan 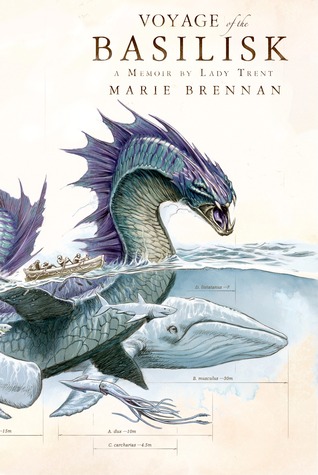 I want to ride a dragon-turtle!

For some reason (unknown to me) I love and are instantly drawn to books that involve any type of wooden ship sea-voyages, or explorations in exotic/foreign lands that involve interactions with the natives. Naturally, it is out of my power that I would be attracted to this series.

The third installment of Lady Trent’s memoirs takes us on an exciting voyage across the seas and to isolated lands. We will meet numerous new dragons (of both land and sea), and Isabella will explore these foreign lands and have a run in with the locals (which always go so well for her). The origins of dragons will the examined, their relationship with the Draceons explored, and Isabella will fight to keep the secret of dragon bone a hidden secret.

My one and only problem with this story was the pacing. Though this is only a single point of issue, I found it a big let down for me. These novels generally start off with a lack of action and focus more on Isaballe’s life (being a women and the political set-backs involved with that) or delve into the biology of dragons. Then things go a long, and the story sucks me; Usualy Isabella manages to get to herself in some situation, and that drama and the actions that comes with it it was hooks me in for good, while sill giving a nice balance on the scientific study of dragons thrown in between.

This time, I just kept waiting and waiting for that drama and action to come to the front, and have the story just sweep me away. But it never it came until very late – for me, at least. There are little bits here and there, but they would die down quickly, and we would be back to the academics.

I have read the previous two novels, so I understand not to expect there to be giant, fire breathing dragons every page simply because the book has dragons in it. I know that this series is focused on Isabella, a naturalist, anthropologically studying and exploring the origins and mysteries of dragons. I very much like that about these novels. These are very realistic fantasy to me, in the sense that they only thing that makes them fantasy genre, is that Isabella is studying dragons instead of monkeys. I love that twist of the genre! All the theories of evolutions for dragons, the explanations of their anatomies, and study of their environments and habits – I eat all the stuff up! The actual studying and explaining of the dragons in favorite part! However, I am here read to fantasy fiction, not fantasy non-fiction. By that, I mean story first, academics second.

Aside from the pacing though, I was into this story. I said I loved the academics of this series and I mean it! This story heavily focuses on dragon evolution. Trying to figure out why there are different types of dragons; are all dragons related or just certain types? How far back can we trace them? Are they more closely related to birds or lizards or fish.? What even defines a dragon?

Unfortunately I only ever learnt linguistic anthropology, not much vertebrae. However, I do have a background in biology and in it, learned a bit of evolution… just enough for me to try to solve all these question right along with Isabella!

Anways, we get two new characters time worth of mention. Suhail is an archeologist that Isabella meets along her travels. He is a serious academic like her self, but having a man in her company is always bound to start rumors for poor Isabella. The one man who did not bring any rumors was Jake – her son. For this trip, she decided to bring the young boy along. I like Jake, but man, I am so jealous! It would be incredibly awesome to be him, having Isabella as my mom and have her take me on this voyage. Jake is also very much like his mother. Remember how Isabelle was for her parents? KARMA

A major theme in this series is Isabella trying to overcome the social restrictions placed on her because she is a women. I don’t think it plays as major a role (by that, I mean hinderance to academics pursuits) as the previous novel, but it is still there. There are a few moments that get me a little heated with how she was being treated or taken advantage of, but thank god these are memoirs. (I know for a fact that all these issues get resolved, because she notes it does.) I can rest easy knowing she gets to stick it to the man. (Just have to wait and see how she is going to do it.)

A reason I also think that her being a women didn’t hinder her as much as it had in the past, is due to the fact that she is slowly overcoming it. We get little glimpses here and there that she is making changes and strides. Obviously, any man with half the career of hers would have been basically knighted by a princess by the now; but because of her persistnace to not let that stand in her way of her academics, she will win.

Granted these are fantasy stories, but I still have certain sense of what is real and believable in this world. With that in mind, there is what I would call a “fisherman’s tale”, at the end of the book. Isabella says it happened, but I call torus excrimentum. Pics or it didn’t happen 😛

This was a good book, but I’d have to say it’s the weakest of the series. We make great headways in the dragon research, but the story didn’t quite hook me in as with the past books. The action was few, late coming, and the drama wasn’t nearly as stressful as before. However, that is relative the previous two books, not other works.

Still love this series, one of my favorites, and if you are looking to continue this series or deciding to pick it up – I say YES to both. )Can’t forget the artwork of Todd Lockwood! Sketches in this books are amazing again!) This is a series unlike any others I am currently reading, and are eager to see what kind of trouble Isabelle gets herself into next time!

I get slightly scared only thinking about trying to swim with dolphins, but I would jump at at a chance to get in the water with a dragon turtle… or some else 😉

8 thoughts on “Book Review: Voyage of the Basilisk (Memoir by Lady Trent #3) by Marie Brennan”